Before We Have an Argument… 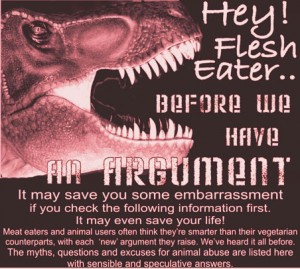 1. We need meat to obtain protein and iron.

2. Animals don’t think or feel the way we do.

6. Without animals the economy would crumble.

8. If we’re not meat eaters why does it taste good?

10. What would we do with all the cattle etc?

11. How will we feed everybody without meat?

15. Plants suffer too. Should we stop eating them?

Each of these will be addressed.
1. We need meat to obtain protein and iron
There’s no denying that meat contains protein and iron… but not as much (per calorie) as soy and many other vegetables. Meat also contains toxins, pesticides, growth hormones and cholesterol. Other sources of protein and iron are readily available, cheaper, much cleaner and don’t hurt you or animals. The iron in meat can only be absorbed if eaten with food rich in Vitamin C. Meat protein is second hand, coming originally from the vegetables the animal ate. Our bodies are designed for vegetable protein not flesh, that’s why we have a long digestive system and mainly flat teeth. We don’t need as much protein as once thought and there’s a theory that too much iron is dangerous, maybe even cancer forming.
2. Animals don’t think or feel the way we do
Our compassion for another must not be limited by our estimation of their intelligence, otherwise we might eat intellectually handicapped people. Not all animals can think abstractly, most don’t need to. Extensive tests have proven, however, that with many species the only marked difference from human thinking is language! All mammals have evolved with emotions. It’s essential to our survival. Without love and loyalty the young and sick would perish. Pigs forced to live in an area the size of a double bed all their lives are just as unhappy as you would be. All vertebrates feel pain by exactly the same mechanism, the nervous system. To cut a lamb’s throat hurts just as much as it would hurt your baby. A hook in a fish’s mouth hurts just as much as it would in yours.

3. Animals were ‘put’ here for our use
The Bible makes many references to the evil of animal slaughter. Spiritual beliefs are a personal choice and our right, except when they encroach on another’s freedom. In other words: You may believe in an inhumane God that ‘put’ animals were here for humans to abuse but many believe that humans were ‘put’ here to protect the innocent… and Creation. The species you eat were here millions of years before humans. People have often used their god’s will as an excuse for their own greed and obscene behaviour. That’s why we don’t all believe in the same god or at least can’t agree on which ancient text or teacher was the real McCoy. Any god who expects you to hurt animals (including people) can go to Hell.

4. Animal testing prevents human suffering
It’s true that without burning out the eyes of a squealing, terrified rabbit with chemicals, some women may have suffered a little discomfort while putting on make-up! The fact is: there is not one single disease that has been prevented by animal testing. In fact the results have often been misleading and disastrous. They tested Thalidomide on animals and found it was.. ‘armless!

5. Culling feral & native animals is necessary
Natural selection ensures the bigger, stronger, more intelligent animals survive. Culling, although a temporary solution to overpopulation, speeds up natural selection by killing off the stupid, slower, weaker ones. Mainly, feral animals are just descendants of unwanted, un-de-sexed pets and no more evil than them. Often the victims of human stupidity or neglect are blamed and punished. Sterilisation practices actually work better. Culling is often just an excuse for a sadistic sport. Cull hunters instead!

6. Without animals the economy would crumble
That’s what they said about the abolishment of black slavery and child slavery. If the World turned vegetarian overnight it could destroy our economy and many would cheer. It won’t happen overnight although the meat industry is already dying as people discover the benefits of less meat. Industries will adapt. Cruelty-free meat made from soy, wheat or mushroom protein, is already a big industry in Buddhist countries. It’s available here through some Asian  shops and is slowly finding its way into our supermarkets.

8. If we’re not meat eaters why does it taste good?
Raw meat smells and tastes disgusting to most humans and putrefies in a long digestive system (like ours) eventually causing death by toxemia. Accidentally our ancestors discovered that burnt animals tasted better and didn’t make you sick. Heat breaks down and carbonises the protein, sugars and fat into digestible/palatable substances. There’s a positive test to see if humans are natural carnivores: Put a small child in a playpen with a rabbit and an apple. If it kills the rabbit and eats it, then plays with the apple… it’s a carnivore. If it plays with the rabbit and eats the apple…

9. If not meat, what would we eat?
Only stupid vegetarians would just eat mashed potatoes and peas without the chops. Actually, there can be more protein in the serve of peas than in a chop! Cooking with meat can limit the imagination. When you have to create nutritious meals without a separate piece of protein, the sky’s the limit. There are also many cholesterol-free meat, chicken and fish substitutes with a great taste and texture. Cloned, non-sentient meat is a scientific reality, too, grown, rather than cut from a murdered corpse.

10. What would we do with all the cattle etc?
About ten million head of cattle die, terrified every day in the US alone. That’s a lot of wasted life and wasted, trampled land, and wasted forests that were cleared for those poor, doomed creatures, who actually prefer living around shady trees! When the demand for meat disappears animals will stop being bred. Those that are left will be able to return to a semi-wild state like their ancestors. Their numbers can be controlled by fertility programs.

11. How will we feed everybody without meat?
If 10% of Americans, alone, gave up eating meat, sixty million people, who starve to death each year, could be saved. The food that is given to meat-producing animals, could feed more than twenty times as many people as the meat from those animals! In the same amount of land it takes to graze one cow, sixty thousand tonnes of potatoes per year can be grown, etc. There’s enough food growing right now to feed the World twice over, but up to 85% of it is fed to animals who will die for the taste of their blood. Need I go on? Without meat production everyone on Earth could eat.

12. Meat eaters are healthier, vegos get sick
The biggest killers in western society are heart attack and cancer. The incidence of heart attack and cancer is 10 to 35 times greater in meat eaters. Many Olympic champions are vegetarian or vegan. Vegetarians who eat properly get less colds, don’t get as fat, live up to twenty five years longer, have better sex and don’t stink as much.

13. Human rights should come first
Why are human rights important? Isn’t it because we, as thinking beings, have realised that other human beings, no matter what shape, colour or background, need basically the same things and deserve the same considerations as ourselves? Some of us, as thinking, feeling beings have recognised that not just human animals but all animals, capable of feeling joy or pain, deserve those same considerations. Human rights are important because we are mortal and vulnerable. Because we are ANIMAL! Human rights ARE animal rights.

14. It’s natural to breed and farm animals
According to an American survey: every Macca’s ‘Quarter Pounder’ cost the Earth one hectare of rainforest and used three thousand litres of potential drinking water. The court case involving two people who published facts about damage caused by McDonalds, ended up proving most of those facts to be correct (Watch the movie ‘McLibel’). Everywhere animals have been grazed there has been environmental damage. The Sahara Desert is an example of what was, a long time ago, a lush plain, until humans grazed goats and sheep extensively in the area. Deforestation, soil degradation, pollution, etc, etc. I’m sure Mother Nature wouldn’t think there was anything natural about farming.

15. Plants suffer too. Should we stop eating them?
All living cells respond to stimulus. A plant is a colony of cells that are interconnected. When a plant is attacked the whole colony responds before it re-grows or withers and dies. Animals are also cell colonies. Because animals are more mobile than plants they have evolved a nervous system to warn of damage so that muscles can be used to move away from danger. If a tree can’t move away from the bushfire or the logger why would it need to suffer? Fruit and foliage has to be eaten to spread the seeds and fertilizer for those plants. Only animals feel physical and emotional pain because plants don’t have the physiology to create those feelings. Fortunately Nature isn’t as stupid as the people who propose such silly arguments.

16. I have the right to choose to eat meat
Do you also have the right to rape my daughter? No. Because the law prevents it and because it’s immoral to hurt a defenceless being. If it was illegal to kill or eat animals you would no longer have that right, either. Personal rights can only be exercised freely when they don’t infringe the rights of others. When they do, history has proven, there are those who’ll fight for those who can’t. Even if rape was legal, if you tried to hurt my children I would probably kill you. Any parent would. It’s an animal instinct. We’d stop you because you have no right, legal or not, to hurt an innocent being. Animals are innocent beings. If you hurt animals I have the ‘right’ to stop you. At present you have the right to eat meat and I have the ‘right’ to discourage you. There’s a growing number of good people who want to see an end to industries that rape the land and murder enslaved animals. It may take time but it’s natural evolution for all humans to recognise equal rights for all sentient beings.