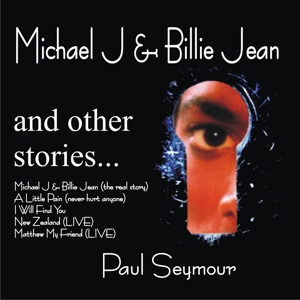 While Paul was rehearsing his own version of Michael Jackson’s Billie Jean, he got curious about the origin of the song. After some research he found that the song story was based on an incident which had happened to Michael. This inspired Paul to write a song about the (perhaps) real story of Billie Jean.

It was intentionally written in a similar style to ‘Billie Jean’ but carefully avoided any plagiarism of lyric or melody. It took over a year from inception to finished production but promotion of the song halted after a legal warning that greedy people might sue Paul, if the song was successful, based on the flimsy argument that the song used Michael’s name and reference to his famous song. The E.P. cover also used a small portion of Michael’s face from the ‘Billie Jean’ album. Consequently the radio version never got aired.

‘A Little Pain (never hurt anyone)’ was written in the seventies. The first version of it was a ‘Police’-style rock song. The second version emerged in the nineties as a ‘Dance’ song. This version is a laid-back fully acapella rendition with multiple layers of Paul’s voice.

‘I Will Find You’ was an experiment in a style Paul hadn’t attempted before: a rollicking, foot-tapping country-folk tune.

The last two songs are live recordings from a concert: ‘New Zealand’, an anthem-esque tribute to Paul’s new-found homeland, and ‘Matthew My Friend’ which honours an old friend and music colleague who, sadly, passed away.