People assume sheep are stupid but, in fact, it is the people who are too stupid to recognise that sheep and many other animals are actually highly intelligent. It’s just a different kind of intelligence which doesn’t necessarily fit into our pre-conceived idea of what intelligence is. Humans are profoundly arrogant in their assumption that they are the most intelligent species and we tend to use human intelligence as the yard-stick for animal intelligence. 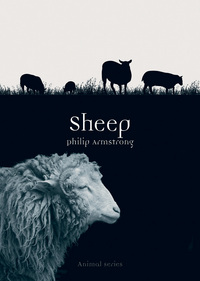 A new book has been written by Professor Philip Armstrong simply entitled ‘Sheep’ and, apparently, it turns common belief about these endearing animals, completely on its head! There’s a really interesting and informative Radio NZ interview with Professor Armstrong, click here.

Philip Armstrong is the Head of the Department of English at the University of Canterbury, where he also runs the New Zealand Centre for Human-Animal Studies with Annie Potts.

They are the authors, with Deidre Brown, of the 2013 book, A New Zealand Book of Beasts: Animals in our Culture, History and Everyday Life (AUP).

With New Zealand poised to resume Live Sheep Exports after they have been banned since 2003, and with Australia still actively sending sheep to the Middle East in abominable conditions and doomed for cruel, ritual slaughter, it’s time for a change of attitude towards these animals and, indeed, all animals.

Professor Armstrong’s book may well be a contributing factor to this change. Of course, we know that intelligence and sentience are not the same thing. Our compassion for other beings should not be limited by our estimation of their intelligence. Sheep and all mammals feel pain, heat, cold and terror and joy exactly… EXACTLY the same way humans do. They are as self-aware as humans and they have a right to live out their lives as happily as possible. No living being should be treated like unfeeling property.

New Zealand is one of the first nations in the World to legally acknowledge the Sentience of Animals, and yet our hypocritical government is considering ignoring the wishes of the majority of the population. They will condemn millions of beautiful, sensitive and intelligent animals to confinement in overcrowded ships’ holds, excruciating heat during travel, starvation for many, disease, terror and finally, if they survive the long journey, a painful death with a blunt knife in a country where there are few laws to protect them from sadistic, unnecessary torture and death.

All this for an industry which yields negligible profit.