“There are very few people in this world I look up to, but sometimes I 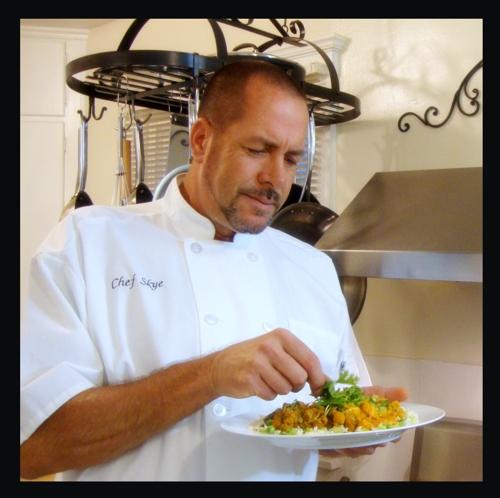 I also don’t look down on anyone either. There are, however,  a few people who have inspired me: Some obvious ones like Gandhi, Salvador Dali, The Beatles, Led Zeppelin, Bill Mollison (the inventor of Permaculture).

Aside from music, for half a century my passion has been to open people’s eyes to the evils of an animal based diet. I hoped and prayed for clever creators of meat and dairy alternatives to become popular and show the World how delicious vegan food should be. Despite the complaints of purist vegans, I knew the best way to encourage veganism was not to make flesh-eaters feel guilty about animal cruelty, nor to tell them of the health and environmental benefits, but to tempt them with mouth-watering substitutes for their ‘traditional’ food. Then a couple of years ago I discovered ‘The Gentle Chef’.

This amazing man had succeeded doing what I had, by trial and error, only just begun to achieve. Skye Michael Conroy had created vegan cheeses far superior to the commercially  produced versions and had written a recipe book to make them. Now, you may scoff and ask
“What’s the big deal?” Let me explain:
Giving up meat was fairly easy. Even back in the 70’s there were quite good meat substitutes and with a bit of imagination I’d always been able to create good food without slices of corpses. But CHEESE??? Oh my God, cheese was a staple and for years I kept eating it, long after abstaining from dead flesh. But dairy manufacture is rife with cruelty, perhaps even worse than meat production, and environmentally disastrous! It had to go. So, when Chef Skye showed me how to make amazing vegan cheese – something I’d struggled to do for years – I was blown away!

I’ve since realised he has recipes for creating every possible meat replacement meal – from ‘Beaf Steak’ and beyond. I will buy ALL of his recipe books and I hope you will, too… and buy mine too, when it’s ready. Thanks.